Endothelial cells form the barrier between vessels and tissues (Aman et al., 2016). They control the flow of substances and fluid into and out of a tissue. An impaired function can lead to serious health issues throughout the body. Endothelial cells line blood vessels and lymphatic vessels, they are found exclusively in vascularized tissue (Bautch and Caron, 2015). 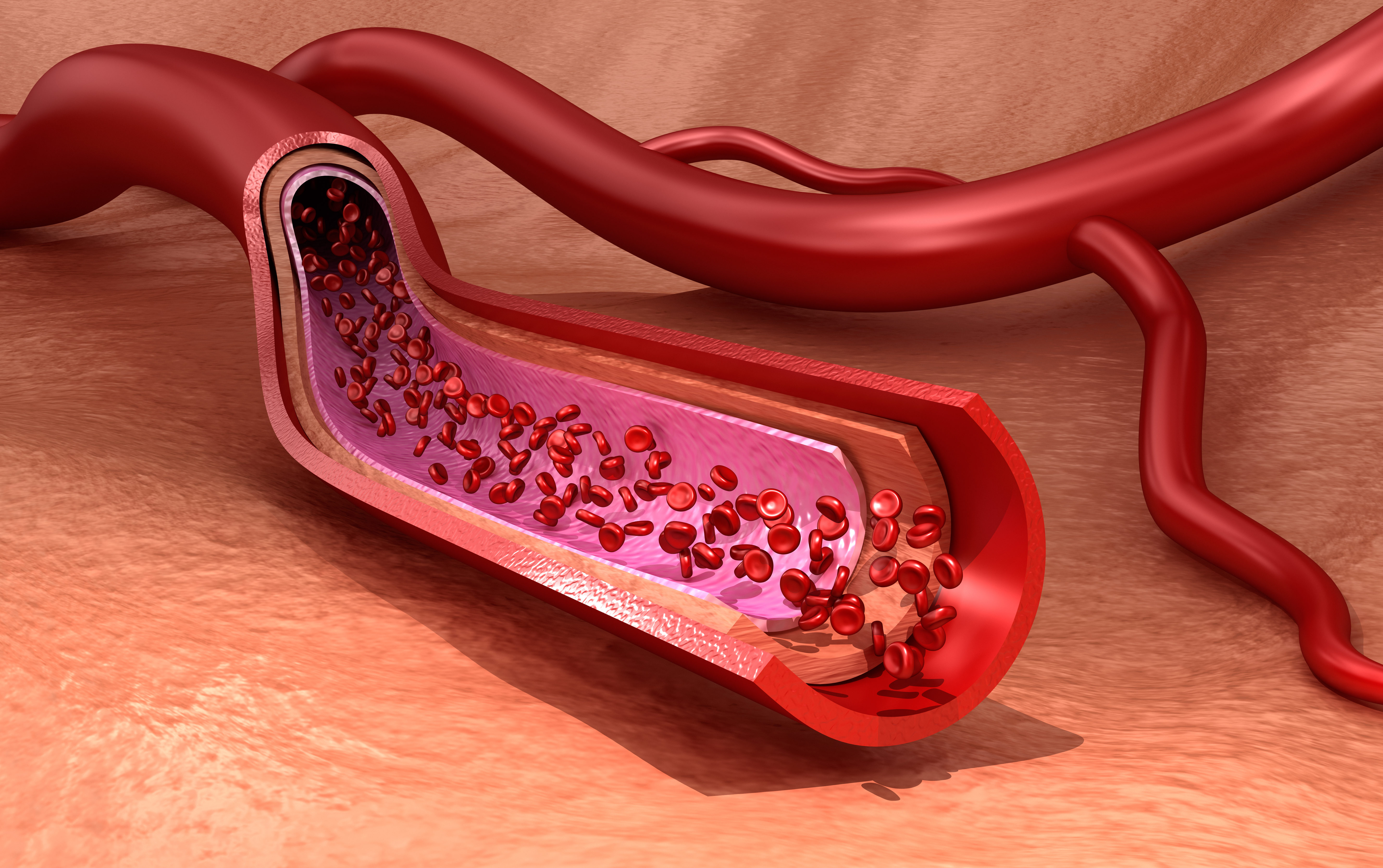 In medical research, endothelial cells are no longer seen as a passive barrier, but as a tissue that fulfills various functions (Michiels, 2003). These include numerous processes, such as blood vessel formation, coagulation and fibrinolysis, regulation of vascular tone, to a role in inflammation. Endothelial cells originate from the mesoderm, a germinal layer that forms at gastrulation, an early embryonic development stage (Bautch and Caron, 2015).

Where are endothelial cells found?

Endothelial cells can be found in all large vessels , namely arteries and veins, as well as in capillaries (Alberts B, Johnson A, Lewis J, et al., 2002). An artery consists of three layers (see illustration above): On the outside, it is sheathed with the Tunica externa, a type of connective tissue. The Tunica media is made up of smooth muscle cells, and the Tunica intima, which contains endothelial cells, lines the lumen of the blood vessel. All endothelial cells share certain molecular characteristics: they test positive for von Willebrand factor (vWF), as well as for CD31 glycoprotein, and they test negative for smooth muscle alpha-actin.

This also applies to endothelial cells in capillaries. Here, endothelial cells are of tremendous importance for the exchange of substances including oxygen, water, and lipids, as well as in the transfer of carbon dioxide and urea from a tissue to a vessel, and vice versa. Depending on the tissue and organ, endothelial cells can vary from each other.

The soluble gas nitric oxide is essential for the regulation of the cells associated with blood vessel function (Tousoulis et al., 2012). Nitric oxide is a vasodilator and exerts its effects by relaxation of smooth muscle cells (Zhao et al., 2015). A dysfunctional NO-pathway is thought to be involved in cardiovascular disease.

In the heart, three cell types enable the lifelong function of this continuously working organ: endothelial cells, fibroblasts, and cardiomyocytes (Lim et al., 2014). The communication between these cell types allows for organ development, autoregulation, and adaptation.

The most rigid separation between vessels and tissue can be found in the brain (Stamatovic et al., 2008). This structure is called the blood-brain barrier and the tight cell-to-cell junctions prevent most paracellular diffusion. Only substances with a specific transporter are picked up by the cerebral endothelial cells and are able to enter the brain.

At the other end of the spectrum, the most permeable endothelial cells of the mammalian body are located in the liver (Poisson et al., 2017). Liver sinusoidal endothelial cells build the interface between liver tissue and the portal vein originating in the gastrointestinal tract.

In the kidneys, endothelial cells play a key role in glomerular filtration (Satchell and Braet, 2009). Fenestrations in the endothelium allow for passage of molecules with a defined size. This prevents an excessive loss of proteins. This mechanism complements the filtration occurring through podocyte filtration slits.

To enable an efficient gas exchange in the lungs, the endothelial barrier must be intact (Rounds et al., 2008). Additionally, a prerequisite for optimal gas exchange is that the alveolar surface remains dry.

Endothelial cells are nearly ubiquitous throughout the body. However, there are two major instances where dysfunction of endothelial cells is involved in pathogenesis of a medical condition. First, in coronary artery disease, endothelial cells are damaged. So the generation of new vascular cells to restore organ function following a myocardial infarction is of high research interest. Understanding this process could help scientists to develop supportive myocardial therapies (He at al., 2017). Another example is atherosclerosis, where endothelial dysfunction arising from chronic inflammation within the arterial wall causes a pathological change of blood vessels (Gimbrone and García-Cardeña, 2016).

The endothelium is crucial for nutrient supply, which is why endothelial cells play an important role in cancer progression (Dudley, 2012). Tumors are defined by a high vascularization activity that can lead to irregular diameters, a fragile anatomy, and even a leaky structure. Understanding the biology behind these mechanisms and studying all factors and cell types involved could be one approach to developing new antiangiogenic therapies. Read our blog post about how scientists are using human umbilical vein endothelial cells in cancer research.

Angiogenesis and healthy endothelial cells are important for virtually all bodily functions. Researchers have been working on methods for studying endothelial cells in vitro for decades, to decipher the various factors that affect formation of new blood vessels in the human body. Many cell types can be used in cell culture research (Read our blog post on primary endothelial cells).

The in vitro tube formation assay allows scientists to analyze such processes in cell culture semi-quantitatively. To conduct this assay, endothelial cells are plated onto a basement-like membrane, and they grow tubules within hours. Afterwards, researchers can analyze different aspects.

The transwell migration assay, also known as Boyden chamber assay, is used for studying leucocyte chemotaxis (Boyden, 1962; Chen, 2005). In brief, cells are placed in the upper compartment of a device with two chambers and allowed to migrate through a microporous membrane into the lower compartment. Their migration along a chemotactic gradient is analyzed quantitatively with this approach.

Another quite similar assay focuses on the migration of cells through extracellular matrix. The invasion assay allows researchers to draw conclusions on invasive migration and proteolytic activity of cells. Those processes are important in angiogenesis as well as in cancer development and metastasis.

The Right Choice of Endothelial Cells for Your Vascular Research