As a researcher working in cell culture, you surely have a deep understanding of your special area of expertise. However, this field of research is enormous, and there is a long cell culture history. Here we present some little-known facts that can add to your knowledge.

Scientific progress would be inconceivable without cell culture. This research tool has become irreplaceable in life sciences, and it has greatly evolved since the beginnings of cell culture history in the early 20th century. Biomedical research today increasingly relies on new approaches including 3D cell culture, primary cell culture, tissue engineering and regenerative therapies. Even if you deal with cell culture every day, chances are we’ve found a few facts about cell culture you didn’t know. Are you ready to learn something new?

Apart from “known” contaminants such as viruses, bacteria, mycoplasma and endotoxins, the plasticizers eluted from plastic instruments, or a range of substances present in water, can also contaminate cells in culture and affect their behavior (Yao and Asayama, 2017).

In 1907, the American zoologist Ross Granville Harrison was the first researcher to successfully grow animal cells outside the body. He adapted the “hanging drop” method from bacteriology for use with tissue culture and managed to culture frog neuroblasts in a lymph medium (Abercrombie, 1961).

#3: More than 32,000 papers rely on cell lines with no known original stock

The use of misidentified cell lines is a very relevant problem in life sciences. Studies estimate that more than 32,000 papers report on results obtained with the wrong cells. Not only that, but up to half a million other papers have cited these reports, making the “contamination“ of literature a very serious issue (Horbach and Halffman, 2017).

#4: More than half of researchers fail to reproduce their own experiments

A Nature survey of more than 1,500 researchers showed that 70 percent of them were unable to reproduce another scientist’s experiments – and half of them failed even to reproduce their own experiments.

#5: The first “immortal” cell line HeLa was established without the donor’s consent

Cells derived from a tumor biopsy of Henrietta Lacks, an African-American woman diagnosed with cervical cancer, were used to establish the first human cell line in 1951. However, tissue samples were taken without her permission or knowledge and her family was not made aware of the line’s existence until 1975. This issue raised many concerns about privacy and patients’ rights in biomedical research. Only in 2013, more than 60 years after her death, the National Institutes of Health and Lacks’ descendants reached agreement on the use of her cells and genetic information. This arrangement established a precedent in cell culture history and research ethics.

#6: Almost 25 percent of all cell line contaminations are caused by HeLa cells

In 1967, American scientist Stanley Michael Gartler examined 20 individual human cell lines he had collected for one of his projects at the University of Washington. He analyzed the glucose-6-phosphate de-hydrogenase (G6PD) and phosphoglucomutase (PGM) polymorphisms via electrophoresis and found out that all cell lines showed the same phenotypes and were therefore genetically identical. Moreover, the detected G6PD allele was found only in people of African descent, even though the original cell lines were derived from donors of Caucasian origin. This observation prompted Gartler to conclude that all cells were HeLa cells that had contaminated and grown over the other cells (Gartler, 1968). This realization caused a huge scientific dilemma and placed a large question mark over the cell culture-based findings of the previous 20 years of cell culture history. Still today, 24 percent of all contaminations among human cell lines are caused by HeLa cells (Lin et al., 2019).

#7: Cell culture history: The first modern medium was created more than 60 years ago

Medium 199 was developed by J.F. Morgan in 1950 and was one of the first synthetic media used to grow mammalian cells in culture (Morgan et al., 1950). The idea of designing a chemically defined medium without animal components made Medium 199 an ideal medium for vaccine production. It also allowed large-scale manufacturing of vaccines for the polio vaccination campaign in 1955. Nine years after Morgan, scientist Harry Eagle developed the minimum essential medium (MEM), which contained a mixture of glucose, salts, amino acids, and vitamins (Eagle, 1959).

#8: Components of culture medium can interact with each other and influence cultured cells

When you are trying to optimize your culture medium, consider this: Individual components of the medium do not act alone. Components can interact, and their effects on cells are not always predictable. This is particularly important when replacing animal sera in culture media. You might need to use mathematical algorithms to optimize the combination of multiple compounds and to establish the best conditions for cellular growth (Yao and Asayama, 2017; Kim and Audet, 2019).

#9: “Mini-brains” can be grown from pluripotent stem cells

Thomas Boland, a bioengineer at the University of Texas, El Paso, was working with an inkjet printer when he noticed that ink droplets were about the same size as human cells. This observation prompted him to fill an ink cartridge with living bovine cells, nutrients and other bio-compatible substances to create “bioink” that was capable of printing living tissues (Patel, 2016).

In April 2019, Tal Dvir, a researcher at Tel Aviv University’s School of Molecular Cell Biology and Biotechnology and his team published a paper on the success of a new protocol for 3D-printing thick, vascularized, and perfusable hearts from a biopsy of human omental tissue. These hearts do not beat and are only the size of a rabbit’s heart, but they completely match the immunological, cellular, biochemical, and anatomical properties of the patients. These results represent a big step forward on the path to finding new treatments for cardiac diseases (Noor et al., 2019).

#12: Engineers and cancer researchers team up to develop a new 3D scaffold

An interdisciplinary team of researchers at the University of Michigan has created a network of fibronectin fibers interlacing across a grid of microscale cubicles. This structure could provide a natural environment for growing cancer cells from individual patients and for testing cancer drugs, two prerequisites for personalized therapeutic approaches (Jordahl et al., 2019).

A recent article in Nature Biotechnology reports on a new method for supercooling and storing human livers at -4ºC without ice formation. This approach could extend the ex vivo life of organs from 12 hours currently to 27 hours, which would expand access to liver transplantation (de Vries et al., 2019).

#14: Artificial intelligence just might interpret your next large data set in cell biology

According to BBC Research, the global 3D cell culture market was valued at USD one billion in 2016 and should almost quadruple in 2021, thus showing an annual growth rate of around 30 percent. Increased investments in R&D, rapid advances in technologies, as well as an improved access to consumer healthcare, all drive market growth. 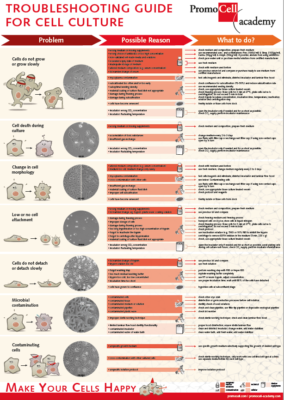 Are your cells growing slowly, or even dying?

Check our Troubleshooting Guide to identify possible causes and to find out how to prevent and solve proliferation problems, contamination, etc.

Learn how to make your cells happy. Request your printed hard copy.

In research and drug development, scientists routinely use cell lines as a model for healthy or diseased tissue. Cell lines offer an easy, inexpensive and stable platform. However, they often do not fully represent what is occurring in vivo. If you want to model the complex physiological behavior,…

Thousands of scientific articles are published each year. It’s a basic series of steps in biomedical research: do experiments, analyze data, publish your results, and repeat. It seems straightforward, but one question remains. How do you write a paper for publication if it’s your first one?
A blank white page, and a silently blinking cursor: How can an empty document be so intimidating?…